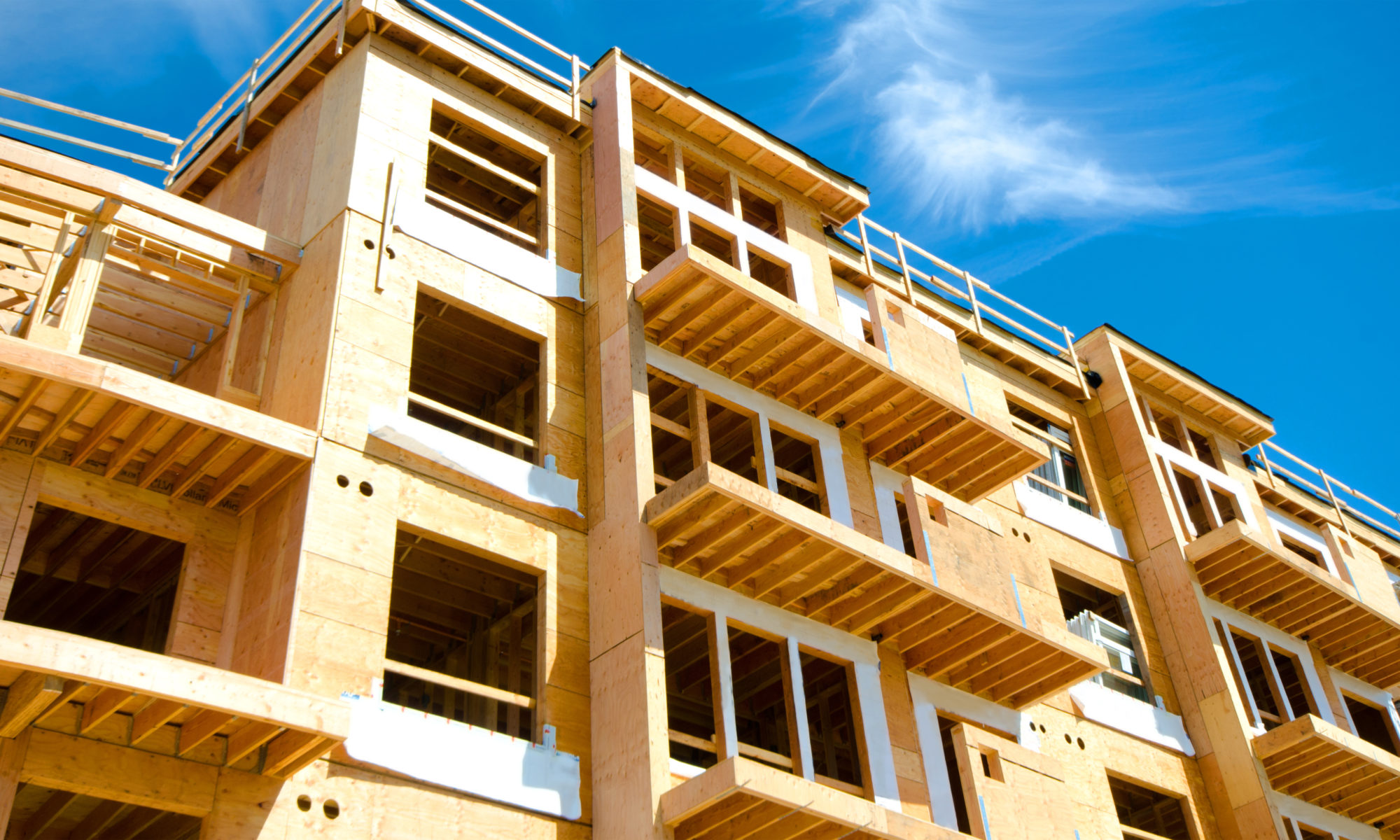 Positive environmental impact and productivity gains from factory prefabrication are examples of arguments used for timber multi-storey construction (TMC). However, relatively few TMC projects have been completed in Finland due to costliness and risks. Why is TMC costly and risky then, and how to diminish these characteristics?

This article was first published in Finnish.

First, there are technical challenges like soundproofing, durability, and restraining structural deflections. Commercial solutions like decoupled structural layers with heavy inert sheathing and prestressing (Asdrubali ym. 2017) can often overcome those. But the hindrance of TMC overall is its immaturity. Still, instead of only expecting TMC to mature and evolve until it fits to existing construction conventions, it would be wise if the usual construction practices were also proactively adapted to fit the processes of TMC. With this two-pronged approach TMC could become broadly commercially viable sooner and offer a competitive advantage to ambitious businesses.

This is one implication drawn from the findings of my master’s thesis “Business problems in timber multi-storey construction ecosystems: reasons to reorganize?”. I studied the applicability of residential TMC in various Finnish main contractor companies through 23 interviews with directors and managers, who totalled over 500 years of expertise on the subject. In addition to inquiring about timber specifically, their reasonings for choosing between different reinforced concrete (RC) frame types were generalized to TMC in the thesis. As recognized in prior research (Hemström ym. 2016), the interviews confirmed that main contractors play a key role in determining a frame type for a building. In their choice however, main contractors must account for other parties as well. Dealing with problems of fitting people together and technologies together, like the different parties involved with TMC, is what learnings from my Organization Design and Leadership major in the master’s programme of Industrial Engineering and Management at Aalto University should allow.

Findings from the interviews: roles and problems in TMC adoption

Ultimately, ten business problems for residential TMC adoption for main contractors were recognized from the interviews:

A TMC ecosystem overview figure below relates the ten problems to project participants who influence the frame-type choice. Most problems connect the main contractor and the timber building element producer. Moreover, substantial resources are required for project contributions from these two parties, which likely requires mutual adaptation to TMC more so than for other parties. This suggests they are the two “keystone roles” (Adner 2016) in a TMC ecosystem. Governmental regulators are particularly important TMC ecosystem participants because of the wide-ranging impact of building codes.

Considering the ten problems altogether clarifies some of the reasons why timber frames are often more expensive than RC frames. As commonly recognized, one part of it comes from higher direct costs from lack of routines and higher complexity of TMC compared to RC (Kesik & Rosemary 2021).  Indirect effects to costs are also significant. The Regulation Problem makes TMC more complex, perhaps partly needlessly. Inefficiencies in the companies’ operating models manifest as the Markup Problem. This problem could be solved by performing element production and main contracting in one integrated company. The Demand Fluctuation Problem is an obstacle for this vertical integration, though: only a few companies in Finland have enough resources to let them execute enough TMC projects to cover the fixed costs of timber element production by themselves.

The Innovation and Risk Problems are other obstacles to investing in TMC. Only TMC projects where the risks are compensated seem to be taken up in Finland, like in simpler, smaller buildings and when timber frames are required by municipalities. Product development and testing could ascertain the robustness of TMC and mitigate the Risk Problem. Similarly, solving the Element Typology and Modifiability Problems starts from technical development, but also requires an ecosystem able to deliver the enhanced product cost-effectively.

The problems imply that existing companies likely either lack motivation, capabilities, or resources to vertically integrate main contracting and element production. Most interviewees suggested, like others have before (Jones ym. 2016), that TMC ecosystem would mature and become cost-competitive with RC through a widening supplier base for timber elements, and product harmonization between the suppliers. This will likely happen eventually, but proactive development of a new TMC ecosystem to solve the ten problems would likely accelerate the adoption of TMC.

Motivated by the possibility of taking the lead in TMC, long-term partnering between an element producer(s) and a main contractor(s) could enable the new ecosystem. A new joint venture, or accommodating the entire operations of the separate companies, or other long-term collaboration between the keystones is required for tackling the ten problems. Benefits of additional recurring revenue, for example, could attract other parties to the collaborative ecosystem as well. A co-operative strategy requires removing operational redundancies and imbalances in rewards and responsibilities between the keystones. A degree of exclusivity for each other’s offerings should be agreed on for mutual enticement. Still, before reaching a large enough scale, the players may also need to act outside the ecosystem to balance solving the Demand Fluctuation- and Element Availability Problems. Large companies would reach a sufficient scale for TMC faster but may find it harder to adapt to a new ecosystem than smaller companies.

As visualized in the above figure, the proactive course of development for new TMC ecosystems would invert the approach commonly foretold. Instead of aiming for an established industry to reach commercial viability, the business should first be fundamentally viable to then act as a seed for a newly established industry. Practically speaking, instead of relying on industry-wide standardization and gradual growth of timber element supply and of TMC experience of (sub)contractors to solve the ten problems, the proactive approach would first tackle the problems and gain a competitive advantage on a smaller scale. Then, companies’ growth and new participants in a successful ecosystem would eventually lead to wide-spread commercial viability of the TMC ecosystem’s standards. The proactive route would arguably be faster, thanks to competitive pressures against RC and other TMC ecosystems. If the new ecosystems can also capitalize on the advantages in prefabrication, precision, quality, and aesthetics that timber provides, there will be strong reasons for many companies to participate.

From the point of view of ecosystems as well as organization design and leadership provided by a background in Industrial Engineering and Management, the thesis supplemented the previous research and public knowledge on the adoption challenges that TMC face in the construction industry. By providing details and practical examples drawn from the interviews, this study highlights organizational and collaboration problems which may have been overshadowed by technical challenges in previous research. It will be up to interested construction industry parties, such as main contractors and regulators, to further consider these issues if they wish to improve the rate of TMC adoption. In any case, operational incompatibility must be solved by collaboration, even if the end state is a TMC ecosystem the like of RC element ecosystems with commoditized products. Why not take the future into the companies’ own hands and collaborate both in the beginning and in the end?

For the whitepaper version and more scholarly sources, the full study is available at: https://aaltodoc.aalto.fi/bitstream/handle/123456789/116333/master_Valkola_Juho_2022.pdf?sequence=2&isAllowed=y